An email recently appeared in my inbox. It's about the taxation of yoga classes in Missouri which, frankly, irks me quite a bit. This email, from Ken McRae, is published in full below (with no edits). For sequences, check out a couple that Ken did for my blog quite a few months ago here and here. 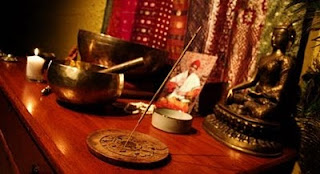 Hello yogis,
My yoga studio is a big empty space with an altar (see photo). On it is a picture of Bapuji, a candle and incense as well as a statue of the Buddha, Hanuman and Ganesha. I have three Tibetan banners hung around the room with Om Mani Padma Om written in script as well as a prayer wheel right beside the attendance sheet for students to spin. Above the attendance sheet is a sign explaining what Namaste and Jai bhagwan mean. In the corner hanging on the wall is a large batik scene of Hanuman flying off on some adventure. I, and my teachers believe in non dualism and we freely teach from that perspective. I often refer to Patanjali's yoga sutras and have sponsored classes whose whole focus was the sutras including the sections on the yamas and niyamas (moral code). I play Sanskrit chanting music as entry and exit music for almost every class otherwise it is soothing flute and harp music. We also teach postures and I end with an Om and a heartfelt Jai bhagwan.
This is simply what I do. Some would call this a yoga class. What do you think?
In Missouri, where I live, the state recently imposed a sales tax on yoga classes (see link below for CNN article and a photo of my studio). My students said "How could they do this. This is my spiritual practice." So I looked up the definition of religion - see below. Note: Each dictionary has a different wording on their definition.
Definition of religion from Dictionary.com
1. a set of beliefs concerning the cause, nature, and purpose of the universe, esp. when considered as the creation of a superhuman agency or agencies, usually involving devotional and ritual observances, and often containing a moral code governing the conduct of human affairs.
2. a specific fundamental set of beliefs and practices generally agreed upon by a number of persons or sects: the Christian religion; the Buddhist religion.
Seems to me that what I do in my "yoga class" might be defined as a religion. I am not saying it is. I just do what I do.
I then proceeded to look at both the American Constitution and the Missouri State Constitution. The First Amendment deals with religion and clearly states that the government "shall make no law... or prohibiting the free exercise thereof..." See below. Seems to me that taxing "yoga" which by definition is a religion is against both the US and state Constitution.
Amendment 1 - Freedom of Religion, Press, Expression. Ratified 12/15/1791. Note
Congress shall make no law respecting an establishment of religion, or prohibiting the free exercise thereof; or abridging the freedom of speech, or of the press; or the right of the people peaceably to assemble, and to petition the Government for a redress of grievances
A bill has been introduced in the Missouri State legislature sponsored by a Democratic Senator and a Democratic Congress Person to exempt sales tax on yoga when it is offered in a "yoga studio setting" clearly not associated with a gym or exercise facility. I think this approach is a reasonable one and actually shows some creativity and respect. The bill is in committee and I am told that it is likely not to pass because we have a Republican majority here in Missouri.
For the first 5 months I did not charge my students the tax but chose to absorb it and pay it myself. Once this cost hit over $1000 I could no longer afford to do this. The students now pay the tax on top of their yoga pass fees. Gulp. I have protested the tax offically with the Department of Revenue and if the exemption passes a refund will follow. I am "holding the pose" until that day happens.
See article on Missouri tax here.
http://money.cnn.com/galleries/2010/news/1004/gallery.wacky_state_taxes/5.html
Anyway - enough.
May you be able to welcome each moment just as it is.
Jai, Sudhakar Ken McRae 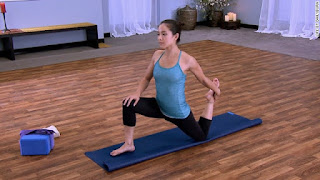